Is It Possible to Treat Stage 4 Lung Cancer? 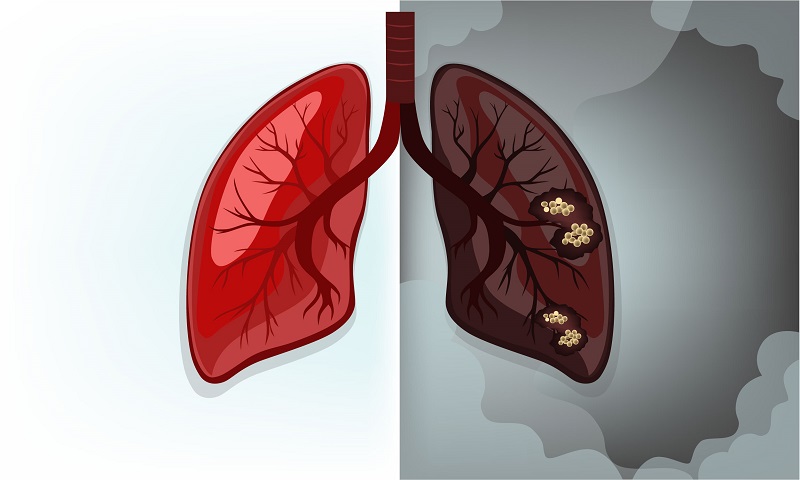 Lung cancer originates from the lungs, spongy organs positioned in the chest that take in oxygen and release carbon dioxide upon exhalation.

The classification of lung cancer depends on the extent to which it has spread in the body. Generally, the higher the stage, the more widespread cancer is.

In Stage 4 or advanced lung cancer, the disease proliferates from the lung to other parts of the body. Metastasis happens when cancer cells separate from the primary tumor and flow through the body via the blood or lymph. Lung cancer cells usually move to the brain, bones, liver, and adrenal glands. As the tumor passes through organs, other metastatic tumors start developing in those regions.

Following are the two substages:

Stage 4A cancer occurs in the following cases:

In this substage, cancer is developed in more than one organ and is challenging to treat.

Following are some symptoms that are most likely to occur as the ailment progresses:

Other symptoms occur when cancer starts metastasizing to other parts of the body, which include the following:

It is essential to visit a doctor if a patient is experiencing these symptoms, to prevent further growth of lung cancer.

The two primary types of lung cancer include

Non-small cell lung cancer (NSCLC) is the major type of lung cancer and ranges from stage 1 to 4. The classification of these stages depends on various factors, including the following:

In stage 4A, the tumor may differ in size, and it may or may not have metastasized to the lymph nodes. Stage 4A NSCLC can also be present in the following cases:

In stage 4B, the cancer is prevalent in organs far away from the lung. It is common but generally harder to treat. Stage 4B has a slight chance of survival.

Small cell lung cancer is the second most common stage. SCLC is divided into two stages:

When only one side of the chest is affected by cancer, it is SCLC. In this stage, cancer is advanced only in one lung and the lymph nodes surrounding it. If multiple tumors have grown in both lungs, it is not limited-stage SCLC.

Extensive-stage SCLC is metastatic and is similar to stage 4 non-small cell lung cancer. Lung cancer is considered an extensive-stage SCLC when it has extended in the main lung or into the other lung, remote lymph nodes, or to any other organs of the body.

These tumors grow at a slow pace and make up about 90 percent of lung carcinoid cases. Typical carcinoids do not metastasize to other organs and are not related to smoking either. This tumor is diagnosed at the age of 45 or above.

Atypical carcinoids grow at a much faster rate and have higher chances of developing in other body areas. These carcinoids may be related to smoking and occur less frequently than typical carcinoids. The cells resemble those of a fast-growing tumor. Typical carcinoids are diagnosed in people at the age of 55 or above.

Following are some rare forms of lung cancer:

This forms in cells that produce mucus and is diagnosed in smokers.

This is present in the central airways of the lungs.

A kind of cancer that forms in thin tissue called mesothelium, which lines the lungs and abdomen.

The estimation of the life expectancy for a patient suffering from stage 4 lung cancer is done by considering the five-year relative survival rate. A five-year relative survival rate shows the possibility that a person with stage 4 lung cancer would live up to five years after the diagnosis, compared to those who don't have cancer.

According to ACS, patients with metastatic NSCLC have a 7 percent five-year relative survival rate and for metastatic SCLC is 3 percent.

The five-year relative survival rate is based on patients who have had cancer for five years or above and is not dependent on the type of cancer or the treatment the patient is receiving.

Since the mid-1980s, the number of new lung cancer cases in men has decreased annually, while in women, the decline started in the mid-2000s. In black men, the chances of lung cancer increase by 15% compared to white men, while in black women, the chances are 14% less than in white women. Lung cancer typically develops in patients at the age of 65. The average age of diagnosis is 70.

On average, lung cancer makes up about 25% of total cancer deaths. Between 2014 to 2018, the death rates declined by 5% for men with lung cancer, whereas the death rates for women dropped by 4% per year. According to research, the decline in these rates is due to people making lifestyle changes such as quitting smoking and medical advancements in diagnosis and treatment.

SCI can now evaluate a set of biomarkers in every lung cancer patient to inhibit cancer-causing pathways using targeted therapies.

Chemosensitivity testing is performed in patients with lung cancer to determine which chemotherapy is effective.

Testing for natural substances is also an essential aspect because:

Genetic changes are arising due to the unique nature of exposure to carcinogens. SCI can now treat these new cancers with specific therapies that include angiogenesis inhibitors to block new blood vessel growth.

The treatment plan includes the following:

The use of natural substances is synergistic and increases the effectiveness of the treatment.

The prognosis for stage 4 lung cancer has relatively decreased because of Immunotherapy with checkpoint inhibitors. The increased rates of tumor mutational burden and microsatellite instability make these checkpoint inhibitors more effective. During this therapy, the underlying immune system of the patient is critical and is constantly evaluated and optimized.