How is Stage 4 Ovarian Cancer Treated? 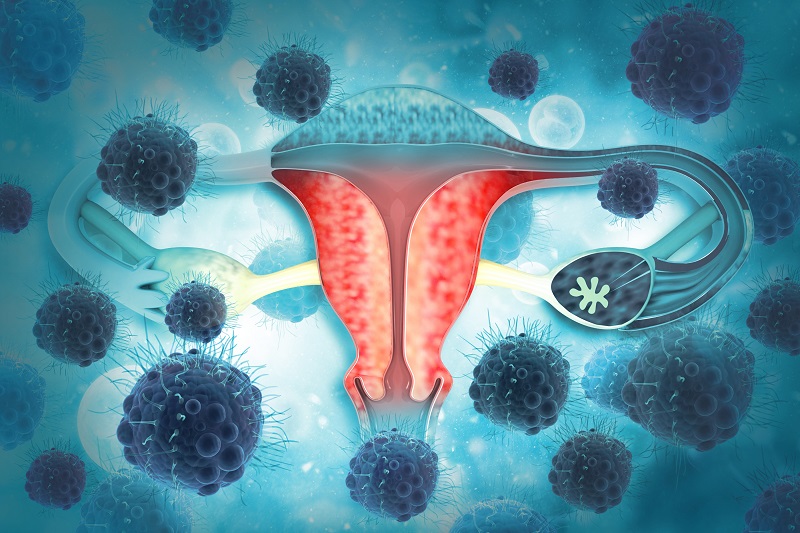 Stage 4 ovarian cancer is also known as advanced or late-stage ovarian cancer. In stage 4, ovarian cancer spreads past the reproductive system to other body organs and tissues, which may include the following:

Studies show that only 30.3% of the population with stage 4 ovarian cancer can survive up to 5 years after the diagnosis.

Stage 4 ovarian cancer typically shows nonspecific or asymptomatic symptoms such as frequent urination, bloating, and pain in the reproductive organs.

Standard treatment plans may include surgery (followed by chemotherapy) to remove as many cancerous cells as possible. People who do not want to undergo surgery can receive palliative care instead.

Stage 4 cancer is divided into the following substages:

Stage 4A ovarian cancer occurs when the cancerous cells spread into the fluid layer surrounding the lungs. This phenomenon is known as malignant pleural effusion. Cancer cells do not metastasize to other locations outside the pelvis or peritoneal cavity. The peritoneum is the thin membrane lining of the abdomen's external cavity, covering the abdominal organs.

In stage 4B, cancerous cells spread to areas outside of the peritoneal cavity, such as:

Earlier stages of ovarian cancer show asymptomatic signs, and later stages show nonspecific symptoms; thus, confusion with other diseases may occur during identification. Research shows that more than 75% of people with ovarian cancer are diagnosed at an advanced stage when cancer has metastasized to other organs.

Following are the symptoms of stage 4 cancer:

These symptoms do not help recognize ovarian cancer because they are widely found in populations who do not have it.

Factors that increase the risk of ovarian cancers are mentioned below:

The possibility of developing ovarian cancer increases with age. The chances of ovarian cancer are less in women younger than 40. It usually develops in women after menopause or who are 63 years of age or older.

Obesity increases the chances of developing many cancers. However, the information available for ovarian cancer and obesity is not clear. Women with a body mass index of 30 or more have a greater tendency to develop earlier stages of ovarian cancer. The survival rate in women with ovarian cancer is very low, especially if they are obese.

Having Children at a Later Age or Never Being Pregnant

The likelihood of developing ovarian cancer is higher in women who have their first pregnancy after 35 years or have never been pregnant.

Women who intake estrogens alone or with progesterone after menopause are at a greater risk of developing ovarian cancer than women who do not use hormones.

Ovarian cancer can also develop due to genetic or family history. The probability for ovarian cancer increases if a family member such as mother, sister, or daughter already has it.

If other types of cancer such as colorectal and breast cancer run in the family, the risk for ovarian cancer increases due to the mutations in specific genes.

In vitro fertilization (IVF) is a popular fertility treatment that appears to increase the chance of the formation of ovarian cysts, which are known as "low malignant potential" or "borderline."

Women with a history of breast cancer are at a much higher chance of developing ovarian cancer. It is due to mutations in the BRCA1 or BRCA2 genes, associated with an increased likelihood of ovarian cancer.

Smoking causes an increased risk for the mucinous type of ovarian cancer. However, many studies have not shown the clear effect of smoking.

The survival rate of ovarian cancer

The chances of ovarian cancer estimated by the American Cancer Society in the United States for 2021 are:

Ovarian cancer is fifth in cancer deaths among women, accounting for more deaths than other female reproductive system cancer. The chance for a woman to get ovarian cancer throughout her lifetime is around 1 in 78. The possibility for death from ovarian cancer is about 1 in 108. (The statistics mentioned above do not include low malignant potential ovarian tumors.)

The prognosis of the cancer is common in older women. Most of the women diagnosed with ovarian cancer are of the age of 63 or older. The prevalence rate of ovarian cancer is higher in white women than African American women.

Studies show that the rate at which women are diagnosed with ovarian cancer has slowly fallen over the past 20 years.

A transvaginal ultrasound test examines female reproductive organs and bladder and helps identify any abnormal masses or bumps on the upper surface of the ovaries and within cysts that develop inside the ovaries.

A pelvic exam is a part of a regular gynecologic wellness exam. In this exam, the doctor places one or two fingers into the vaginal opening and another over the patient's abdomen to observe the ovaries and uterus size, shape, and position.

Recto-vaginal Pelvic Examination examines the ovaries for lumps. A Pap test is a routine test in a pelvic exam, but it identifies cervical cancer, not ovarian cancer.

How is Advanced-stage Ovarian Cancer Treated?

The following therapies are the main treatments for ovarian cancer:

Following are the treatment options available at SCI:

SCI can now profile through genomic testing to evaluate the tumor drivers. Tumor drivers are pathways that cause the multiplication of cancerous cells. The factors causing mutations include:

This treatment strategy blocks multiple pathways to stop the growth of cancerous cells.

The prognosis and recurrence of ovarian cancer can be predicted by evaluating the circulating cancer cells. Chemosensitivity testing is conducted in patients with ovarian cancer to decide which chemotherapy is effective.

The patient's biomarkers are evaluated in this therapy. This therapy helps to see which cancer pathways are causing ovarian cancer to become more aggressive. The treatment plan includes the following:

Personalized vaccines are produced according to each stage 4 ovarian cancer patient. The circulating cancer cells are taken from the patient's blood to make this vaccine and then injected directly into the bloodstream to destroy the cancer cells.